Mysore’s rich heritage draws two types of crowds to itself: one that wants to marvel at the arches of the Mysore Palace and the other that wants to arch on the instructions of their Ashtanga-yoga guru. Of course, there are other forms also taught here, but being the birthplace of Ashtanga Vinyasa yoga or Mysore yoga (as it is popularly known), most practitioners prefer this style over the others. This style was developed by Sri Krishna Pattabhi Jois, a disciple of Sri T. Krishnamacharya一revered as one of the most influential yoga teachers of the 20th century. The city一officially known as Mysuru一has also earned the moniker: Astangana yoga capital of India. An unwritten rule followed by seekers who plan to come here is that a minimum one-month of relentless dedication and stay is needed if you truly want to learn something. Drop-in classes and week-long courses are slowly gaining popularity but for the purists, it still remains a strict no-no. Since many classes start as early as 4:30 am, it would be a good idea to search for locations close to your centre.

Mysore has a pleasant climate most of the months, making it a year-round destination. March ー May is warm with cool nights while June ー September is when the rains grace the city. Most seekers, however, commence their learning from November and some even extend their stay till March when the summer starts. Do make it a point to register much in advance to avoid the last-moment rush; especially if you plan to learn at the prominent centres here. Photo by Abhishek rana on Unsplash

The most popular style of yoga taught here is Ashtanga Vinyasa yoga or Mysore yoga as it is also known popularly. You will find a lot of teachers of this form, though B. N. S. Iyengar deserves a special mention for his teaching. Other forms like Hatha yoga, Ashtanga yoga, Iyengar yoga, and Aerial yoga are also available but the number of classes are few. Prana Vashya yoga is another form that has also attracted a lot of interest in the region. Most seekers throng Gokulam where the Sri K. Pattabhi Jois Ashtanga Yoga Institute is located. That has pushed up the price of accomodation here. Lakshmipuram comes next in the list.

Spiritual places to visit in Mysore

Mysore offers you plenty of places to tune into the divine energies. What’s wonderful is that many of them are located in such serene locations that the entire experience of one’s visit is magnified. Even though they may not specify, all places of worship here require you to cover yourself appropriately. Some places also have visiting hours, so do make it a point to confirm this beforehand. This temple, dedicated to an incarnation of Goddess Parvati, Nimishamba, is famed for her ability to resolve issues in a nimisham (minute) if you pray with pure devotion. Photo by Pratheesh CG from Pexels

Located atop the Chamundi hills, this is one of the oldest temples in Mysore and considered a must-visit for visitors. One of the largest in the country, this Lord Vishnu temple is believed to house one of His eight self-manifested idols. Image by Prasad Ganapule from Pixabay

Lord Shiva’s holy-vehicle Nandi’s monolithic statue (the third-largest in India) is the biggest attraction of this temple. 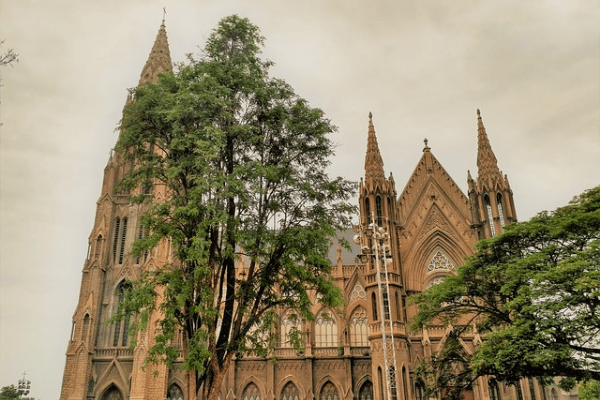 Image by yovankumartvr from Pixabay

Ranked the second-largest in Asia, this church is built in Neo-Gothic style and has beautiful stained-glass windows that highlight all major events in Jesus Christ’s life. 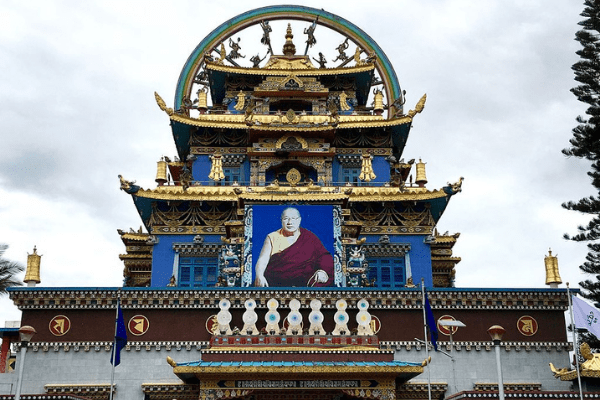 This monastery is the largest teaching centre of Nyingmapa (the lineage of Tibetan Buddhism) in the world and has the teachings of Lord Buddha preserved intact for worldwide propagation.

Other attractions in Mysore

The cultural capital of Karnataka, Mysore, has more to offer than just the grand palaces that grace it. The heritage, culture, paintings, and art forms of this little city take you back to the days when the kings ruled it. The “ivory city” (as it is also called) has beautiful nature parks and water bodies that take the tranquility level a notch higher. Want to indulge your senses into a medley of experiences? Head to the gullies selling authentic Mysore silk, sample the pure sandalwood oil, and sink your teeth into the deliciously sweet Mysuru Pak. The joy will sure reflect in your next class. Photo by Sivakumar B from Pexels

To be included in the list are Mysore masala-dosa, bondas, sunday-special pineapple kesari baath, and bisi bele baath. Photo by Rizki Oceano on Unsplash

Shop at the Devraja market

A heritage site, this vibrant market dates back to the reigns of Tipu Sutan and is a great spot to either pick local flowers, fruits, vegetables, etc. or train your camera for some awesome shots. Photo by Daniel Gynn on Unsplash

Make way to the Karanji Lake Nature Park to see a wide range of amazing bird species that will leave you longing for more. Photo by Souravi Sinha on Unsplash

Head to the Government silk weaving factory and get a first-hand experience of how authentic silk is woven. Photo by Drupad Sachania on Unsplash

Discover the best spots that Mysore has with walks tailored to your areas of interest. Photo by Kristjan Kotar on Unsplash

Trek up a hill

Test your pranayama’s efficiency by trekking 1008 steps of the Chamdunda hills; home to the Chamundeshwari temple.